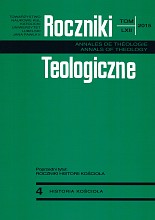 Summary/Abstract: The Patritions of Poland introduced a demarcation line within the historically united territory of the Archdiocese of Gniezno. Some of its was incorporated into Russia, while the other into Prussia. Gniezno - the bishop's seat - was located in the Hohenzollerns' state, along with its canonical area consisting of 3 separate districts. When Poland reached for independence, the Catholic Church found itself in an urgent need to reorganize its territorial structure, so as to become effective in its pastoral mission in the new circumstances. This problem was scrutinized by the Polish Episcopate in the years 1919-1924. A number of conceptions were developed for how to redefine the borders of the particular dioceses. Some of these reflections are visible in the Bull of Circumscription issued by Pius XI Vixdum Poloniae Unitas as of 28 October 1925.This document announced the emergence of two new metropolises: of Cracow and Lviv; and of four new dioceses: of Częstochowa, Katowice, Łomża and Pinsk. Of considerable import were also papal decisions as for the structure and organization of the Archdiocese of Gniezno. The pope decreed that two Poznań deaconries − of Miłosław and Jarocin − be integrated within the Archdiocese of Gniezno (with 23 parishes altogether). At the same time, the deaconries of Ołobok and Krotoszyn (24 parishes) were separated from Gniezno, and integrated within the Poznań archdiocesan structure. This reorganization eliminated enclaves in the Archdiocese of Gniezno and produced a structurally coherent ecclesiastic unit, which covered about 12000 sq.km. The resultant territorial organization remained valid until 1992, that is untilJohn Paul II's Bull Totus Tuus Poloniae Populus.