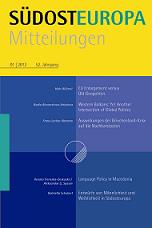 Summary/Abstract: The focus of the article lies on the reflection of gender concepts in Southeast Europe in view of their diachronic development from pre-modern to our times, posing the question: how did Europeanization, globalization as well as political and social changes in the region itself influence role concepts of both genders and their relation to each other. In the beginning, pre-modern patriarchal conceptions of masculinity and femininity are outlined which had developed and had been ruling in Southeast Europe during the Ottoman Empire. In the patriarchal society of the Balkans, with the dominating position of men and the subordinated position of women, we can speak of a clear gender order. After the Second World War, socialist rulers wanted to establish sexual equality. Women were granted access to education and employment. Their active role in the work process was, however, tied to the claim that they had to fulfill the reproductive role of a working-class mother at the same time. The double work burden of women was the consequence. Altogether traditional gender roles have hardly changed since this time. Presently hybrid, overlapping and often contradictory concepts of masculinity and femininity can be observed in Southeast Europe: they oscillate between global and local variants, mingled with gender values and a behaviour which very often follows traditional patterns.