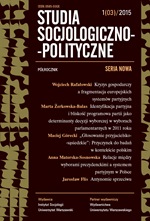 Summary/Abstract: Interpretation of Polish political divisions is difficult, if one takes as a reference the traditional division into left wing and right wing politics. Similar difficulties are caused by a phenomenon emerging in all European democracies described as populism. The essay presents a perspective that allows to combine both problems by offering one explanation. It reveals how the main Polish division axis, perpendicular to the traditional left wing-right wing axis, is part of a phenomenon present in other countries. This interpretation also explains the nature of the Polish movements known as populist ones.