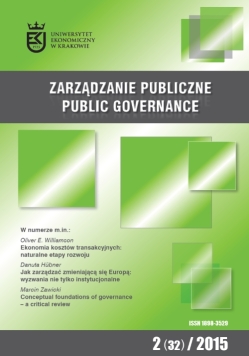 Summary/Abstract: After the crisis, the European Union is more cohesive and capable of looking for good unconventional solutions which, however, arouse substantial controversy. The crisis led to a reform, unprecedented in scale, of European integration mechanisms. The European Commission will now have greater responsibility in areas related to managing the economy in the euro zone. The European Council took on a quasi-legislative role. The European Parliament continues to live up to its competencies, which were significantly increased by the Lisbon Treaty. The role of the ECB has also changed, and it is now involved, among others, in uniform supervision as well as in bank restructuring and establishing an orderly bank bankruptcy system. In recent years, certain policy areas managed at the national level have been Europeanized. The EU participates in the process of deciding on national budgets, which causes defiance and inevitably leads to a search for a formula based on dual legitimacy through the cooperation between the EP and national parliaments. The latter have also become European actors through the subsidiarity control mechanism. Another challenge for good governance in an integrating Europe is the decision-making system for the revision of the Treaties. In the event of absence of unanimity, solutions are adopted that assume the form of international agreements which hardly respect the criteria of democratic legitimacy. The Treaties guarantee the transparency of the process and the participation of European or national institutions in decision-making as part of democratic governance mechanisms. Any departure not only from the Community-based method, but also from the Treatybased ones, deprives the integration process of these guarantees.