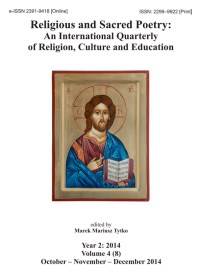 Summary/Abstract: The article deals with the musical poetry of the Czech poet Bohuslav Reynek (31 May 1892, Petrkov – 28 September 1971, Petrkov) and its reception by musicians over the last the last three or nearly four decades. Not only numerous Czech musicians from various areas of popular music but also classical composers have turned Reynek’s poetry into music. As far as pop musicians are concerned, they come from the Czech folk, Christian-folk, alternative-folk, rock, indie-rock, punk, underground, jazz and alternative-jazz scenes. Although Reynek’s poetry draws inspiration from expressionism – Reynek himself used to translate expressionist poets (mainly Georg Trakl) – it is also very musical, and many musicians claim that it directly asks to be turned into music via its prominent rhythms and hidden melodies, its interesting themes (i.e. frequent biblical and Christian inspirations), or its lyrical atmosphere, often influenced by the autumn and winter seasons. Bohuslav Reynek is one of the Czech poets who are often set to music even though he was silenced as a writer after 1948 and had to be rediscovered in the late 1960s and – mainly – the early 1990s. The translations of the poems by Reynek’s wife Suzanne Renaud (1889 Lyon, France – 1964 Havlíčkův Brod), a poet and translator of Czech poetry into French, have also been set to music. This article’s main merit lies not only in highlighting the complexity of the musical interpretation of Reynek’s work by a particular composer, but also in the identification of what it was that brought Reynek’s poetry to the composers’ attention.