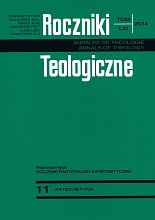 Wzór katechezy, w której centrum jest wyjaśnianie pism
A Model of Catechesis, in Whose Center There is the Explanation of Writings

Summary/Abstract: Catechesis keeps reaching for its fundamental source, that is God’s Word. The Church’s call for a renewal of the basic relation with the Person of Jesus in God’s Word is still topical, as well as the reminder that faith requires such an encounter. In this key the article draws the reader’s attention to two aspects of Christology of the Word that are rarely present in the modern theological interpretation: its performative and sacramental character. Next, it analyzes the concept of catechesis understood as ecclesial mediation in entering the relation with God’s Word, in the experience that guarantees reaching the depth of the person. It reaches for an argument coming from the Scripture, summarizing the words that are said by the Word’s servants and witnesses about the substantial power of God’s Word. It points to one of the aspects of theology of the Word in St Luke the Evangelist’s text, and finally it shows what can be the model of catechesis. An important conclusion for modern catechesis and religion teaching at school is that today there are a lot of words that would like to replace God’s Word. They are all the human words considered to be efficient, effective, fruitful - but sooner or later they have to acknowledge their limitations. We cannot surrender to one of the most veiled temptations of our times, that is that other words, other technologies, other methods, so-called psycho-pedagogical ones, can be more efficient than God’s Word.