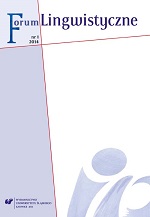 Summary/Abstract: In this article the author proposes Polish readers a post-structural view of the semantic evolution of words – the classical problem of historical semantics. The author presents Geoffrey Hughes’s theory presenting the problem of meaning changes of words and their typology from the point of view of major processes of European civilization and history development: printing, mass media, political and religious doctrines (totalitarisms and Protestantism. In the author’s opinion Hughes’s conception is of a methodological value because – in agreement with the spirit of cognitivism and the 19th c. language studies – it enables recognition of a close relationship between language and institutionalised forms of human existence. The article is a discussion of Hughes’s typology of semantic changes based on the social criterion (social factor). The description presents three types of the changes: 1) symbiotic, 2) mediated, and 3) orwellian.