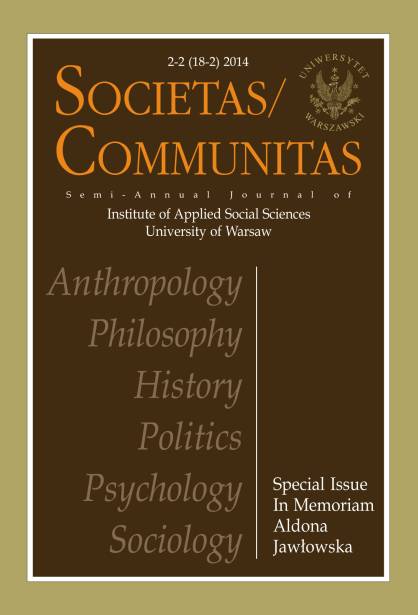 Summary/Abstract: Sociological reflection on politics seems partly unanimous only about one issue: that politics have escaped the influence of social actors, including those representing the state, and have become a field of effect of not always clear macro-processes, ruled by chance or by contingencies (Luhmann). The elimination of individuals and rational discourse from the sphere of political agency is nonetheless accompanied by a rhetoric of their agency role, the influence of their voice and opinions on key political issues. The efforts to expose and explain this phenomenon invoke different phraseologies, from the diagnosis that the 'power elite' manipulates the masses, unnoticeably and consistently taking over legislative power at the same time (Mills); through various modifications of politics becoming independent and of their auto-creativity (Lash and Urry); or their autopoiesis (Luhmann); institutional reflectiveness and expert systems (Giddens); to the concept of 'seduction' (Baudrillard) - a gentle but ruthlessly consistent strategy of seduction which the masses succumb to without losing the (illusory) sense of subjectivity. The answer to these processes given 'in the name of the subject' may be a slip of subjective activity into the sphere of sub-politics (Beck). It is an activity which is non-instrumental, non-executive and indescribable in terminology, far from purposive rationality (e.g. a strike or traffic jam), but which nonetheless once again brings in the subject to social institutions 'abandoned' by politics. Another answer offered by sociology is locating subjectivity, pushed out of social communication, in 'new communities' (Giddens) created around different modes of information use. As a consequence of these processes political communication transforms from a domain of discourse (which has changed its social location) to a domain of mimesis: depictions using associations and affective models of reaction. In light of the indicated transformations the role of the sociological theory of politics is changing as well. By custom it has established itself as the voice speaking in the interest of the rational subject. Its aim is to identify and strengthen the voices of resistance against political mimesis. Moreover, its aim is to reinforce the desire to find space in which the form of the rational subject would regain its raison d'être.