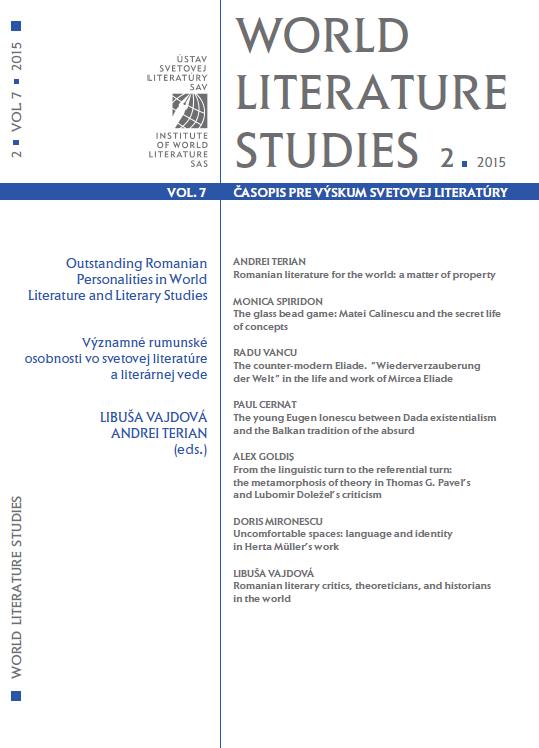 Summary/Abstract: The problem of identity in Herta Müller’s work presents the reader with a number of difficulties. First, there is the complicated mix of Romanian and German (Banat-Swabian, to be precise) culture of the region of this author’s upbringing. However, because of her experience of trauma and painful testimonies from a family consumed with guilt during a time of state oppression, Müller refrains from choosing a singular version of cultural identity as representative for the individual, and neither does she opt for a definition of personal identity as something isolated, self-sufficient, and untainted by the others’ collective identity. This article addresses the question of identity in Herta Müller’s works using the multiple, almost obsessive references to (Romanian) language and culture in her work. First, the German author’s intertextual connections to Romanian literature are explored. The second part of the article is concerned with Müller’s poetics and her reflections on language. The space between languages becomes an apt metaphor for a fragmented and troubled identity, which is more the result of chance than of choice. Her encounter with Romanian language is a decisive cognitive experience whereby the writer becomes fascinated by the divergences between words and things. Living in an oppressive, dictatorial regime means assimilating that space with a culture of violence that can only be exorcised later, through a resort to the critique of nationalist clichés in her Romanian volume Este sau nu este Ion (To Be or Not to Be Ion, 2005). Since culture is defined as plural and ambiguous, it appears that the space of identity is neither inside one culture, nor outside all of them. As Herta Müller’s multilingual puns and enigmatic metaphors show, identity is to be found in the colourful and haunting space between languages and cultures.