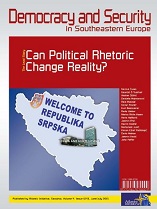 Summary/Abstract: The current situation in the Western Balkans warrants the involvement of external actors in the region. Sometimes, the European Union lacks energy and commitment, while the United States seems to have lost interest completely. Turkey, on the other hand, is a power in its ascendancy, with a long (albeit not recent) history of involvement in the region. Its economic and cultural prowess are sometimes considered to provide the ruling AKP with the means necessary to achieve a so-called ‘Neo-Ottoman’ foreign policy agenda. Official Turkish rhetoric also occasionally provides ammunition to its critics in this regard. However, upon close examination, the facts – in terms of Turkish foreign policy actions, investments, and accomplishments, and its reception among the local population in the Western Balkans – do not back up the theory that some sort of master plan for dominating the region exists.