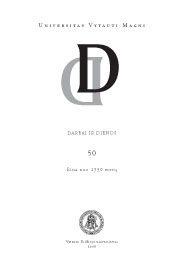 Summary/Abstract: This article examines the contents of the newspaper Darbininkas (The Worker) from 1922 to 1923. That year the Lithuanian Parliament (seimas) was being elected, and the newspaper supported the ideology of the Christian Democratic Party. Generally speaking, most of the Lithuanian press referred to the “Jewish question”, but Darbininkas had a special view of the problem. First of all, the newspaper applied an instrumental use of anti-Semitism: the editors and correspondents knew that there were certain tensions between the Lithuanian and Jewish communities; they also knew that in Lithuanian society Jews were mostly seen as strangers or guests, but not as reliable citizens. Darbininkas used this image of Jews; made it an indicator of instability, unreliability, and general harm to Lithuanian interests; and presented the opponents of the Christian Democratic Party as pro-Jewish, i. e., as defenders of Jewish rather Lithuanian interests. in this way readers of the newspaper, whenever they saw the Jewish minority mentioned, received the impression that everything done in cooperation with the Jewish minority was wrong and anti-Lithuanian, while at the same time the Christian Democrats were pictured as the only and true alternative to Lithuania’s becoming dominated by Jews. So Darbininkas exploited the suspiciousness about Jews in the Lithuanian community and used it as a propaganda tool in the election campaign. In addition, the newspaper’s correspondents seemed to believe to a certain extent that Jews were evil and strictly opposed to Lithuanian rule; this conclusion can be made on the basis of the rhetoric and arguments used in their articles. Thus in this article I focus on Darbininkas’s anti-Semitic rhetoric and the stylistic and genre strategies which the newspaper implemented to achieve its main goal: to create a strong opposition to, and a negative image of, Jews in Lithuania and to use this image in an election campaign as a clear indicator of anti-Lithuanian policies and activities