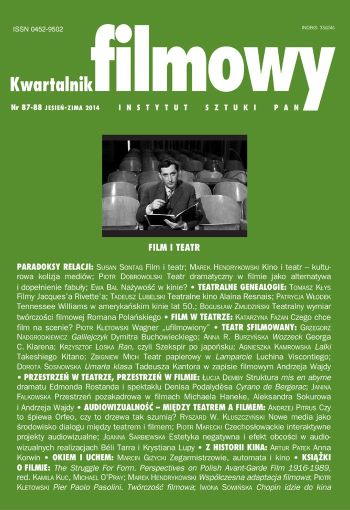 Summary/Abstract: "Der Galiläer" ("The Galilean", 1921) by Dimitri Buchowetzki is a kind of an adaptation of a passion play staged by the Fassnacht family from Freiburg (Germany). Nadgrodkiewicz examines selected elements of the film in order to highlight the tactics of deliberate use of a theatre prototype as a point of departure for developing film narration and dramaturgy. "Der Galiläer" is also an interesting point of reference for the American tournée of the Fassnacht family, which at the turn of 1920s and 1930s in some sense made use of the success of Buchowetzki’s film distributed in the USA in the mid-1920s (as "The Passion Play"). "Der Galiläer" – one of the most important religious films from the silent movie era – allows us to appreciate the relation between theatre and film not in terms of negatively understood theatricality of a film or intentional “theatralization” practices. Rather the circle of mutual inspiration turns out not to be a trap, but a certain potentiality, which allows the analysis of a theatre artefact using the medium of a film and its "documentary” character.