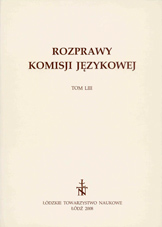 Summary/Abstract: The article proposes applying the concept of semantic roles of predicate’s arguments to study profiled in texts character’s image. Old Polish passion writing (until 1577) has been exploited as a source material, whereas potential for semantic roles methods has been presented on Pontius Pilate example. In shaping the image of this character one can observe lack of directly expressed value. The roles methods analysis however permits to reveal indirect valuation mechanisms. Following roles have been distinguished in Pontius Pilate image: agent of modal and causative acts, agent of prime mover speaking, agent of will, agent of knowledge and mental operations. Profiling the will and intelect sphere in Pontius Pilate image is used to valuate positively the character.