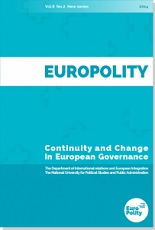 Summary/Abstract: The article examines the proposal, advanced by a number of Realist authors (Mearsheimer, Kissinger, Walt) that a lasting solution to the current crisis in Ukraine can be reached by a "grand bargain" between the West (defined as comprising the EU and US) and Russia. This settlement would mean that Ukraine gains the status of "a bridge between Russia and Europe", pursuing equivalent relationships with both sides without formally becoming part of any competing arrangements (NATO, EU or Customs Union / Eurasian Economic Union). The analysis focuses on three main issues: the arrangement's sustainability, its enforceability and its possible role in a broader Eurasian security architecture. It takes into account the ongoing dynamics of the Ukrainian society, regional evolutions, as well as the wider international environment. It also factors in the interests, perceptions and strategy of the current Russian leadership. In context, a brief comparison is made with the Finnish model, which is often invoked by the proponents of the "bridge" solution. The conclusions reached are that, in the current circumstances, a "50%-50%" type of arrangement could not be sustained with reasonable political, economic and military costs. Its enforceability would also be problematic, given the parties' very different commitment to use the capabilities at their disposal. Taking into account the extremely high difficulty of reaching a mutually satisfactory settlement in Ukrainian case, which must be one of the linchpins of any Eurasian security architecture, it can be concluded that such a broad agreement is also extremely unlikely at this time. A more probable outcome for the near future would be a policy of "complex containment", where economic and political interaction continues at some levels, but is restricted in others and where Russia is no longer perceived as a genuine partner of the West. This would not be a permanent situation, but only a temporary "point of balance", highly dependent on political evolutions, especially those within Russia.