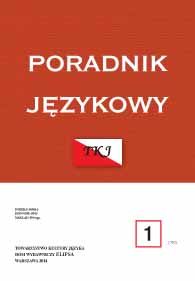 Płód czy dziecko? O językowym ustanawianiu statusu człowieka
A foetus or a child? About linguistic establishment of the status of the human being

Summary/Abstract: The 20th-century linguistic turn resulted in such a perception of language that allowed seeing it not only as a tool for communicating reality but also as an instrument serving the purpose of creating its image. Therefore, it is assumed that the language practice (discourse) of various entities strives for establishing the meanings created thereby in the general awareness. What senses are popularised is considered by the so-called critical discourse analysis an issue that is not indifferent to the social life. This paper discusses the issue of determining the ontic status of the human foetus by diverse opposing and competing discourses, conventionally called anti-abortion and pro-abortion. The former uses expressions with the word child, stressing that nasciturus (Lat. ‘to be born’) belongs to the category HUMAN BEING. The latter, in turn, advocates names such as foetus, abortion, termination of pregnancy, attributing the status of a child to a born person only; what also serves the purpose of reducing the ontic signifi cance of nasciturus is various text strategies and, as a result, nasciturus is ranked lower than the human being in the so-called great chain of being.