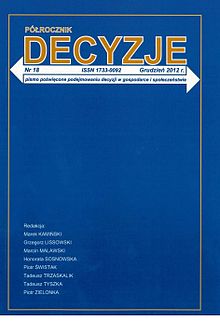 Summary/Abstract: The paper presents the concept of reconstructing the ideological space in parliament on the basis of the MPs' voting. Problems arising during the study of ideology in political science were discussed. A concept of "ideology in action" was presented on the basis of the texts of the classics of modern theories of democracy. The concept was presented as contrasted with a traditional concept of ideology as the project of reality. The theoretical and empirical arguments justifying ex-post modeling of the ideological space were presented. The properties and interpretation of the ideological distances defi ned in accordance with the proposed approach were described. The results of the ideological space in the Sejm of sixth and seventh term were presented. Further analytical capabilities offered by the proposed approach were discussed as well.