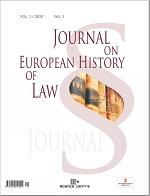 Summary/Abstract: The system of marital property law was primarily formed by the judicial practice based on traditional customary laws in Hungary in the 19th century. The traditional family model meant on the one hand the personal and property independence of both parties stemming from the full capacity of both parties, on the other hand the position of the husband as the head of the family. This position can explain the fact that temporary and final alimony – although being an institution of property law – was dealt with in the area of the legal effects of marriage on persons in special literature. During marital cohabitation it was the husband’s obligation to provide decent maintenance and cover all expenses incurred in relation to matrimony. Discontinuing marital cohabitation did not terminate this obligation, just as marriage was not terminated by it either. The temporary alimony did not depend on whether the wife was at faulty or not for causing the irretrievable breakdown of the marriage. Before the entry into force of the Matrimonial Causes Act (Act 31 of 1894), denominational laws usually regarded the obligation of the husband to provide alimony to be terminated upon the dissolution of the bond. Contrary to this, the Matrimonial Causes Act created a situation far more favourable for the woman. The intention of the lawmaker was to maintain the non-fault woman’s social and financial status enjoyed during marriage in this way, since “the husband, who caused the dissolution of marriage by his injurious conduct and thus deprived her wife of the financial advantages which she could enjoy in the conjugal life, deserves to be obliged to compensate her for the loss of those advantages.”