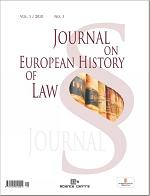 Summary/Abstract: The codification of civil law failed to materialize in the period of classical liberalism in Hungary. The legislative acts of the second part of the 19th century stuck to traditional family model, which assured the dominate role of the husband for the future, too. The first aspect I concentrated in the course of my research is: why the secularized law for married women was more favorable than the traditional divorce law of the denominations. I also examined the differences between the rules concerning men and women in the uniform divorce law and its consequences in the judicial practice. The acts of matrimonial cases, especially the reasons for a judgment gave me insight into the marital conflicts and therefore into the everyday life of the Hungarian families at the end of the 19th century. In light of these factors, I ask: what the position of the husband as head of the family effectively meant.