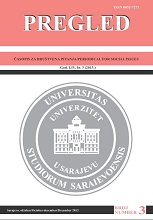 Summary/Abstract: The twentieth century carries about a revival of ethnicity, “the explosion of identity,” the demands for recognition of different minorities as equal socio-political subjects, which resulted in as in the case of some countries even result in bloody conflicts. This variety produces an abundance of open questions, discussions, and ultimately the problems. The first of these questions is how to establish a quality system at the national but also at lower levels to make it possible for each of coexisting groups to be adequately represented in representative bodies? Finding the right answer to this question is of crucial importance for the group individually and for society as a whole. Canadian philosopher Will Kymlicka deals with issues of minority rights in a systematic way, creating a concept he calls “liberal theory of minority rights”. The main point of his conception refers to regularize the position of minority groups by assigning group-differentiated rights include the right to self-government, poliethnic rights and right to special (group) representation. Kymlicka emphasizes the importance of articulation of minority demands and that implies to ensure the representation and participation of minorities in decision-making within political institutions.