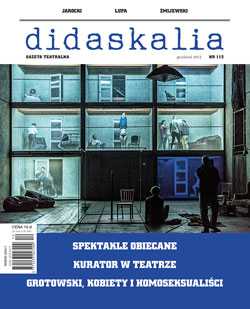 Wskrzeszanie pamięci
The Resurrection of Memory

Summary/Abstract: The Hotel Savoy, a production based on Joseph Roth’s novel, which was directed by Michał Zadara at the Nowy Theatre in Łódź and premiered (15 X 2012) during this year’s Łódż of Four Cultures 2012 – Generations Festival, forms part of an interdisciplinary project devoted to Roth. The production’s point of departure was the novel’s motto: “The Hotel «Savoy» was like a world”. Taking place within the whole space of a historical hotel, the performance is a site specific piece in which every spectator, equipped with a map, plots his/her own route. In the finale, however the hotel happening turns into a kind of Dziady (ancestral spirit) ritual, connecting viewers with a bygone era and the people dwelling in it.