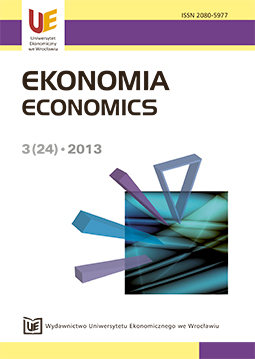 Summary/Abstract: The article refers to the issue of rating and the work of rating agencies with regard to the results of global economic crisis. The discussion has been made on the basis of behavioral current. The thesis of this article has been constituted by a view referring to the rating agencies functions evolution within the space of time as a natural effect adaptable to variable environment conditions. Research hypothesis in the present study has been constructed in the following way: the occurrence of the economic crisis has been a determinant influencing the change and expansion of rating agencies functions. The objectives of this article include the explanation of meaning and the shares of rating agencies and rating in global economic crisis, the indication of macroeconomic functions of rating and the analysis of these functions’ evolution. Yet another aim of the study has been to reveal the meaning of a “soft factor” in market mechanisms by the explanation of heuristics essence in a decision- making process on the example of rating agencies’ work. The dissertation is divided into four chapters preceded by introduction. Each chapter corresponds to subsequent established objective. A crucial part of the study is showing the meaning of behavioral inclinations in the work of rating agencies. The examination of their meaning has been narrowed to the description of decision-making heuristics. The method used in the paper is a theoretical analysis and a compilation of previous research in the field on the basis of literature study. The most important conclusions comprised in the present article focus around the significant meaning of extra economic factors (including the behavioral ones) which form market users’ decisions and concern the role and shares of rating agencies in crisis causal processes. The issue raised seems to be essential because of two reasons: the study expands academic achievements in the scope of rating agencies functioning with new elements, and a demand for rating opinions appears to increase along with the development of financial markets.