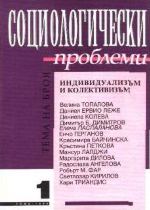 Summary/Abstract: The article deals with national and universal as values in messages of Bulgarian local press. This paper is a segment of a study sponsored by the Centre for Liberal Strategies. The research design is content analysis of eight leading provincial daily papers for five weeks during May-June 1994. Local press contrasts in conflicting manner national versus universal and interprets them through the prism of "ours"-"others" dichotomy, which is characteristic of traditional, pre-modern societies. "Ours", patriotic, or Bulgarian is superior value for the local newspapers but the core of what is seen as identity is not clarified. "Alien" is mainly Global, European, American, — and sometimes Turkish and Islamic. Mainstream of messages is that contact between "ours" and "oth-ers" is dangerous. The "others" is seen as a source of commercialisation of values, of vulgarization of the national identity — elements of fear from modernity. Local press understands universal mainly in negative aspect, cause its point of view is ethnocentrustic in relations between "wegroup" and "others-groups". The image of Western society in local newspapers encompasses both respect and criticism. The local print media (as collective author) don't know what type of society must choose Bulgaria, but they rather dislike the Western model.