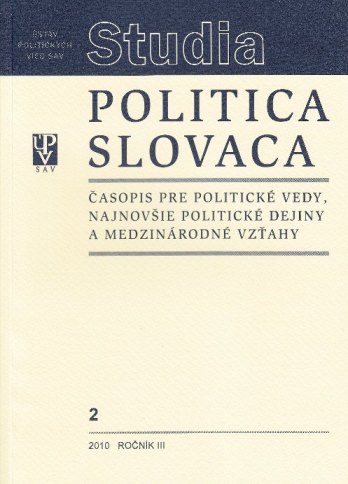 Summary/Abstract: The study surveys post-Cold-War shifts in relations between the great powers in the global perspective and their implications on the development of Slovak political system. Given the uneven development of individual actors it pays special attention to the U.S. hegemonic position and its weakening due to internal changes in the country. The concluding part presents four scenarios of possible development of the world political system: maintaining U.S. hegemony; chaos; effective multilateralism and parallel worlds. Similarly, the study considers several scenarios for Slovakia‘s political system. In terms of international relations, the starting position of the Slovak Republic has been a favourable one. Slovakia does not have to face political, military or other threats on its own. Slovak membership in the European Union and in NATO means that the country has received security guarantees and enjoys development opportunities within Western civilization in the conditions of the globalizing world. At present, the Slovak Republic is regarded as a consolidated and multiparty democratic state. However, the deepening of global economic crisis may bring about changes in the value system of the society and of the political elites, which may have serious consequences. Demographic development and migration presents a specific factor of the change in priorities and in the political culture of Slovak society. The deepening of the global economic crisis with its social and political implications can also lead to conflicts within the society.