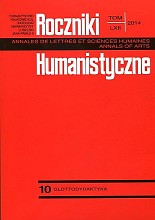 Summary/Abstract: The picture of the reality surrounding us reflected in the language, its structure, lexis and usage – as the linguistic picture of the world may be defined in the shortest way – plays a very important role in any act of communication. It may not be forgotten also in the course of learning and teaching a foreign language. This is because it is the source of numerous mistakes, especially lexical ones. The author of the article shows this on examples taken from the literature of the subject as well as from his own didactic work. Observing the process of acquisition of a foreign language, and of the mistakes made by both learners and teachers, may tell linguists a lot not only about the linguistic picture of the world in the language being learned, but – through contrast – in the researcher’s mother tongue.