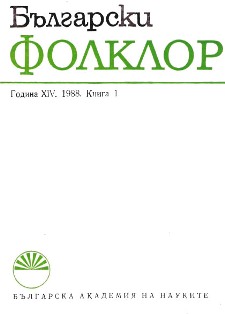 Summary/Abstract: The article aims to include the unjustifiably underrated non-standard folklore forms in the mainstream of artistic development. Attention specifically focuses on the proslov (a term proposed by the author and translatable loosely as “pro-word”) by defining, on the one hand, its links to the well-known folk genres as proverb, anecdote, humorous story and, on the other, pointing out those specific features which necessitate its separate treatment. On the basis of contemporary folklore material and of material from the period of the Bulgarian National Revival, an attempt is made to reconstruct such forms. Discussion of the material focuses on the search and identification of the mutual links between oral and written literary forms within the large context of Slaveikov’s works. The interactions observed are presented consistently in terms of genre structures, historical poetics and stylistics. The main results have been presented within literary, general cultural and socio-psychological frame of reference. The model of interaction establishes translation as the basic mechanism which builds up ambivalent expression, expands the types of communications and conditions, the ways of presenting a situation. The mechanism has been traced in P. R. Slaveikov’s poetical, satirical and journalistic heritage.