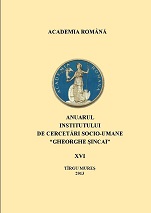 Summary/Abstract: After 1945, the Romanian-Hungarian relations have been officially presented as normal, appropriate for two friendly socialist states, without raising any special issue. But, beyond the official relations between two good neighbours, in specific circumstances, some issues and differences did emerge. These were generated by historic legacies of the two states and nations. Two of the major factors that influenced the bilateral relations were the issue of minorities and that of the ethnic Hungarians from Romania. Once the nationalist socialism line of the Ceausescu regime became proeminent, the relations between the two states got tensioned. The overthrow of Ceausescu’s dictatorship released the tension at the level of the bilateral relations between the two neighbours. Beginning with the change in the political regime, almost instantaneously the first conveyance of aids from Hungary set off for Romania. The Hungarian government was the first to diplomatically recognise the leadership of the FSN (National Salvation Front) and using its international connections lobbied for the Bucharest government at the chancelaries of the Western states. Several Hungarian delegations arrived to Bucharest in order to resume bilateral discussions. But this euphoria of the renewed Romanian-Hungarian relations was soon shadowed by the same old differences. The “interference” of Hungary, its presence at different levels was regarded as disturbing for the Romania, the latter considering that its neighbour exaggeratedly tried to interfere with Romania’s process of transition.