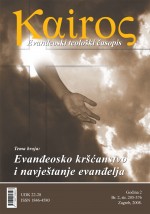 Summary/Abstract: In this article, the author primarily covers a theological-anthropological understanding of personality as it experiences ontological change in the event and process of conversion/metanoia. The author approaches the Protestant and Orthodox theological discourse by a comparative analysis of conversion/metanoia, and points out their similarities and differences. In this work, conversion/metanoia is understood as holistic and unique, as a primarily existential phenomenon which changes personality, orients it, and permanently transforms it. In the last part, the author refers to a few newer critical reviews of the traditional Protestant doctrine of conversion, and points out the importance of new approaches to conversion in the context of the postmodern age.