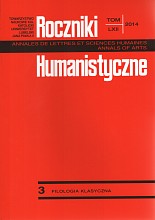 Summary/Abstract: In recent years there have been published many critical feminist studies of Aristotle, especially concerning philosopher’s views on females. According to feminist scholars Aristotle’s claims about female sex, even in his biological writings, are the result not of honest science, but of “male bias” and misogynist ideology typical of ancient Greek men: the female is for Stagirite a“deficient male,” a teleological failure, a kind of “monster” whose birth results from pure material necessity. In this paper I admit that Aristotle’s account of the female sex provides some kind of rationalization of Greek social attitudes, but I also try to argue that his conclusions about females are, above all, influenced by his philosophical theories. In may opinion, the female, which in Aristotle’s biological writings—particularly in his embryology—is related to the matter and privation, is not a “monster,” but embodies one of the principles maintaining the existence of the whole universe, and, as such, is necessary not only accidentally, but also teleologically.