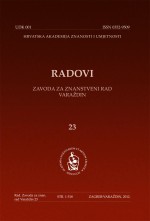 Summary/Abstract: In this article, the author had described the socio - political events in the city of Varaždin from the beginning of 1941. until the second half of the year. The described events haven’t been so far scientific researched or linked together in one study. From the beginning of 1941. city of Varaždin was a town district (kotar) and county district (srez) center in the northwestern Croatia, which housed four barracks of the Yugoslav Army. Because of its strategic importance, Varaždin has become an important goal of the incoming war. After the establishment of the NDH and the initial order, the summer began with the first arrests of Jews, Serbs and Romas, and their removal to concentration camps. Organized resistance in the form of anti-fascist movement in Varaždin, conducted by the local organization of the Communist party, began in July 1941.