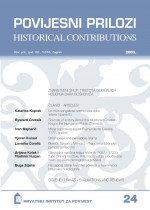 Summary/Abstract: The Archives of the Croatian Academy of Science and Arts in Zagreb contain a rich collection of glagolitic archival documents, especially from Istria and northern Croatian littoral. Some glagolitic documents are from the early mediaeval period and documents from later mediaeval period are also available. Still, glagolitic documents from the 16th to 18th century are the most numerous and contain more than 150 unpublished official documents and around 30 various registers of births, marriages and deaths for various communities of island of Krk. Vjekoslav Štefanić registered most of these glagolitic documents, but later noone seriously researched these archival sources. This paper attempts to show the importance of research of glagolitic registers, especially as an element of demographic and family history. Registers contain names of several thousand baptized children, but the article concentrates on a twenty years long period which contain 610 names of baptized children. This information can give us a good insight on some qualities of life in Dobrinj community during the late 17th century. The article gives information about yearly and monthly distribution of baptized children and tries to explain the possible reasons for the uneven distribution of born and baptized children through different parts of a year. Other information is also presented (male/famale division of baptized children, their names, illegitimate children). Results of the research are compared with the identical data from some other parts of Croatia, although there are only few scientific articles concerning this subject. Nevetheless, comparison of the results obtained from Dobrinj with other similar analyses show that Dobrinj community had a development similar to other Croatian communites and towns during the same period.