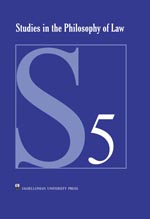 Summary/Abstract: When looking back at the history of ethics, formulating the satisfying conditions of a moral agent has been one of the most important problems of moral philosophy. The topic of moral agency is relevant for several practical problems like abortion, euthanasia and is putatively the most important issue for any discussion of animal rights. It is worth noting that well established criteria of moral agency would not only help us to resolve moral conflicts but is also necessary for applying any moral theory in practice. For many years animals were omitted from ethics since it was founded in an anthropocentric approach to moral philosophy. Yet year after year, the ubiquitous view of animals (that they are mere automata, with no dominion over their actions and are created purely for the sake of human species) has slowly been evaporating. The aim of this article is to show an intrinsically consistent stipulation of moral agency as well as its legal consequences which arise in virtue of the discussion of animal rights. Despite the fact that this article breaks a taboo of comparing animals with humans (which is still present in countries with a strongly religious background), it is not my goal to equate persons with non-human animals. The view of ethics given here comes from Peter Singer’s interpretation of the equal consideration of interests principle and is supported in R.M. Hare’s two-levels of moral thinking theory. I argue that this view imposes on us (humans) a strong obligation to defi ne the criteria of moral agency, i.e. to make precise who and by virtue of what features or circumstances should be regarded as a moral agent. Grasping the strong intuitively notion of interest, I agree with P. Singer’s criterion of being an ethical subject and I try to investigate what it means in our everyday practice.