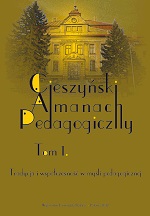 Summary/Abstract: The czech theatre in Cieszyn throughout 120 years was planing the role of “pedagologital theatre” (in the reasonning of Margaret Dietrich, austrian theatrologist) as it was acquainting with Czech language, popularizing knowledge of Czech Republic and czech nation, aquaintingwith national dramaturgy, with the theatrical works of czech cultural centres. It was also widening the horizons of knowledge and also, that is mostly significant when speaking of the national borderline matters, it was popularring (with few recalled exept (ons) patterns of conflict free Polish-Czech co-existenceachieved thanks to the support of the Cieszyn’s in habitants of the polish nationality. Firstly it was done at the patchy, when it comes to the nationality profice, territory followed by solely Polish domain. Appearance of the Czech theatre in the Polish reality of Cieszyn, as one of the modern forms of popularizing culture, becomes also a challenge when it comes both to the multicultural education in its wide perspective and to the multidimensional prooving the ability of multiculural dialoque.