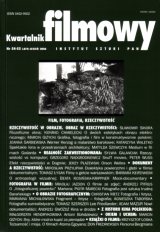 Summary/Abstract: Nadgrodkiewicz analyses Joel Schumacher’s movie "Eight Millimeter" (1999) in which the film director makes references to a phenomenon of the so-called snuff movies. Nadgrodkiewicz tries to show how Schumacher convinces the viewer of the existence of the organized industry of films depicting murder scenes. Nadgrodkiewicz claims that Schumacher repeated the most popular stereotypes concerning this ‘urban legend’ but declined to acknowledge the facts contradicting existence of the films. To prove the thesis that snuff movies exist Schumacher attributed to the film such properties (issues of copies, aura and authenticity, contact with anti-pornographic discourses, voyeurism) that allow us to believe that the films are a kind of ‘cultural concept’ rather than authentic crime accounts. The author of this analysis also points out that snuff films in "Eight Millimeter" take on the form of modern trompe l’oeil, which would support their status as the simulacrum with no reference in reality.