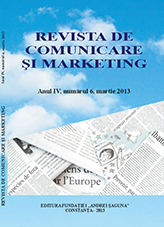 Summary/Abstract: European countries have started (and some already ended) the process of replacing analogue with digital television. Romania is involved in the process of transition from analogue to digital terrestrial television set to finish initially in 2012 and postponed to 2015. Pointing out the importance of adopting digital terrestrial broadcasting standards for the media industry, the article analyses the different stages of transition from analogue to digital technology, in the European context. The purpose of the study is to critically approach the main problems the Romanian transition encountered, and identify potential solutions to respect the new deadline and the European standards.