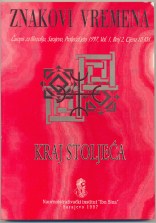 Summary/Abstract: The opus of Ivo Andrić belongs to that sort of literature which applies artistic devices to its involvement in the powerful ideology nowadays named Eurocentrism in the world, whose strategic goals have been evident from partially successful endeavors to negativize Orient and Oriental spirituality, and primarily Islamic Oriental spirituality in its entirety, to the extent when that world and that spirituality become considered and "justified" subject of negative treatment by powerful Eurocentrist forces. Eurocentrism is active in humanities, in manifold cultural domains, but also in the arts, which is exemplified exactly by Andrić's literary work which, on account of its highly successful ideological involvement rather than its artistic value, received twofold reward: it had been crowned with the Nobel Prize for Literature and, simultaneously and quite naturally, was institutionalized as required reading in the world of Eurocentrist values - therefore, in countries of the former socialist Yugoslavia - with this institutionalization being of particular consequence for Bosniaks, who are a subject of Andrić's artistic negativization. A crowning distinction of this magnitude achieves in the internationalized system of values quite specific and clearly intended results regarding the Orient as the subject and goal of Eurocentrist exclusivism.