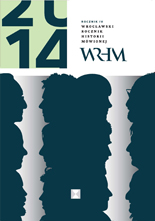 Summary/Abstract: Władysław Ząbek was born and raised in France, in Pas-de-Calais department, as a child of Polish emigrants who had come to France looking for work. After the Second World War he returned to Wałbrzych in Poland together with his parents, where he still lives. Władysław Ząbek describes mostly his daily life in a mining town in the north of France, dominated by Polish immigrants, he speaks about a Polish school, friendly relationships and the lifestyle of Poles in France. A significant part of the account is dedicated to the years of war and Nazi occupation of France. The next stage of Władysław Ząbek’s life was his return to Poland, to post-war Lower Silesia, which at that time was a national and religious melting-pot. The account shows the difficult beginnings of life in the unknown homeland, issues of Wałbrzych’s reconstruction after the war, the housing situation but also about the habits of re-emigrants from France, who constituted a distinct group in the post-war Wałbrzych and the region. Another important fact in Ząbek’s account is the time of studies in Donieck in the Ukrainian Soviet Socialist Republic which he started following the advice of the headmaster of his secondary school. During his studies, Władysław participated in the Fifth World Festival of Youth and Students in Warsaw (1955) as a French interpreter. It was one of many significant events connected with his contact with France and the French language after his return to Poland proving that the childhood and teenage years spent in France had an impact on his life.