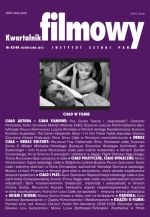 Summary/Abstract: A book review of Michał Legan’s "Balthasar/Tarkowski. Teodramat w filmie" ["Balthasar/Tarkowski. A Theodrama in Film"] (2012). Legan explores the theological possibilities of film, and tries to find out whether the specific language characteristic for the cinema can carry the formulae of a theological treatise. Legan’s starting point is the assumption that the idea of theodrama, described in great theological detail by a Swiss theologian Hans Urs von Balthasar, is also present in the films of the Russian director and script writer Andrei Tarkovsky. The reviewer discusses the trigeminal layout of the book, which consists of the first chapter devoted to biographies and works of Balthasar and Tarkovsky, the second chapter which presents collected analysis of Tarkovsky’s films, made through the prism of the ideas of Balthasar’s theodrama, and the third chapter devoted to parallel interpretation of great Christian theological themes present in Tarkovsky’s films. Nadgrodkiewicz thinks highly of Legan’s book and considers it an excellent example of work on theology of the cinema.