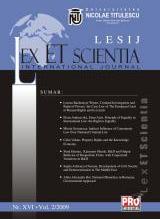 Summary/Abstract: The article wants to make a succinct analysis of the main specific aspects of the shareholders and of the shareholdership of the credit institutions, mainly of those that hold qualifying partnerships. The juridical regime of the qualifying partnership holders is regulated by using the notions of potential acquirer and that of suggested acquisition. According to the new concept of the norms in the banking field, the acquisitions suggested by the potential acquirers are subjected to the notification and approval of the surveillance authority that are the center banks of the member states in most European national legislations. One of the conclusions of great juridical importance in the evaluation process of the National Bank of Romania is that the verification regards a control of the lawfulness and not a control of the opportunity of the suggested acquisitions.