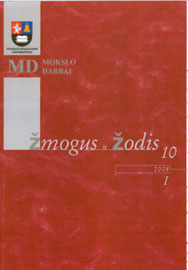 Summary/Abstract: The aim of this research is to examine Eastern Lithuanian sub-dialect of Utena nominal words’ plural of dative and instrumental cases accents of shortened forms by auditive experiment. Investigative material was recorded in two points of this dialect (Molėtai, Saldutiškis). Auditive experiment was performed in two times: with the representatives of Eastern Lithuanian subdialect of Utena and with people who know different dialects. The results of the experiment showed that investigative forms (plural of dative and instrumental cases) differentiation and misrecognition of accents are not clearly identified. Participants of both auditive experiments recognized the forms of one word very well; however, to distinguish the other forms was rather difficult. There were approximately half of word pairs in both groups of auditors that were correctly recognized: in the first - three of eight while in the second - five of eight. Such unequal results of this research allow us to think that in the investigative dialect in these forms there are no clear opposition of accents and their realizations vary even in the same presenter’s speech. In both experiments the same three pairs of words are identified best: šako.m : šako.m, dukteri.m : dukteri.m ir aki.m : aki.m. It proclaims that these words which differential features were perceived by hearing and personally named by auditors are identified best.