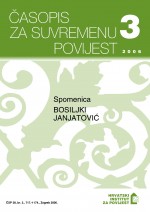 Summary/Abstract: During the modern and contemporary historical era, Istria went through several fundamental social, economic, political and cultural changes with which its population had difficulty coping. These rapid changes confused generations of not only rural, but also urban Istrians because they had an important impact on the breakdown of existing moral, social, and cultural values. The arrival of Italy in this region and the institutionalization of fascism came in many respects as a shock from the first moment. The burning of German and Croatian books from school libraries, the systematic closing of Croatian and Slovenian schools and cultural institutions aimed at the destruction of Croatian and Slovenian ethnic communities. The cultural activity of the "people's government" in Istria during the war (1943-1945) was specific and unique. Above all, it was attuned to wartime conditions on the territory occupied by the German army. Throughout the period 1945-1955 politics determined the tone and shading of cultural efforts while cultural workers and artists attempted to move away from political schemes. Perhaps more than in any other field of human activity, the cultural sphere felt the points of contact and conflict between the East and the West regardless of the fact that it found itself on "this side" of the "iron curtain."