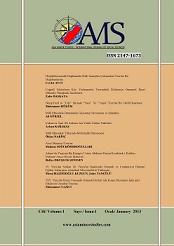 Summary/Abstract: The tradition of minstrelsy and the literature of minstrelsy are of vital importance in terms of Turkish folk literature and Turkish culture. As a representative of this tradition, ashighave become an important representation of our thoughts and feelings from past to the future. The tradition is still continued in Çukurova region. Under the perspective of this tradition, ashigfrom Çukurova not only present old ashig master works but also present new works. Ashig Ali Anbarcı has an important place in Çukurova’s minstrelsy tradition. Ali Anbarcı, who has many works, is one of the (badeli) ashigs. Among the works of Ashig Ali, the folk songs, of which subjects are the lives of Yörük people, are notable. In these folk songs, data about the origins, daily lives, traditions, customs and beliefs of Yörük can be encountered. In this study, Ashig Ali Anbarcı’s folk songs, which he sings for Yörük people, are going to be examined thoroughly.