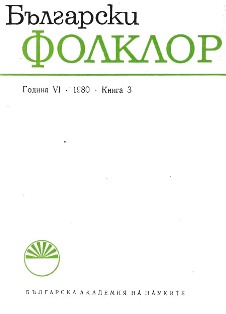 Summary/Abstract: The relations of present-day Bulgarian films with certain traditions and elements of our folklore form a problem as yet unstudied, but which is becoming increasingly topical. The stylistics of a whole series of Bulgarian films, created during the last decade, places this problem on the agenda. These films clearly show that its study should be the fruit of collective efforts – on the part of folklorists and film specialists, all the more so as such a study also leads us to giving significance to certain typological features of Bulgarian artistic culture. In this sense the author delimits two possible levels in posing and analysing the problem. The first of these is connected with the possibility of more fully characterizing certain processes and trends in contemporary Bulgarian film art by means of the links between folklore and screen. The second and more difficult research level presupposes tracing and discovering certain features of Bulgarian culture by means of such an analysis, a culture seen and understood as an original feature of definite national artistic thinking. The present article treats this problem, above all, at the first level thus delimited. Its purpose is to emphasize the presence of links and continuity between folklore and our contemporary film. The author gives a number of examples of films and more complete trends in the Bulgarian cinema – for instance all its attempts at reasoning about the national character and fate, in order to show the community of certain symbols and motifs. The analysis is made chiefly from the positions of a film theoretician and historian. That is why a number of conclusions and findings remain „open”. They await their further elucidation from the positions of folkloristics as well. Only after this has been done would the link between these two types of creative work – folklore and film, distant from one another in time, but the author of which is always a collective one – permit us to make certain generalizations, connected with national artistic thinking and Bulgarian culture.