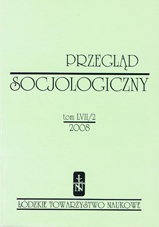 Summary/Abstract: Although there is a strong tendency towards interpreting a history of a “civil society” idea as a coherent narration founded on the presupposed similarities, there can be noticed few radical changes applied in the past to the concept by easy to identify authors. Common to whole Europe republican tradition that since the classical times drew on the idea of civil society as a political community was replaced in German milieu by Hegel at the beginning of nineteenth century. Employed both by a liberal appraisal of Tocqueville and a socialist critique of Marx the idea was understood in a modern reflection as a sphere of civilian economy in opposition to a world of politics, i.e. political society. However communist thinkers in Poland made a significant change to the idea replacing it after Second World War with a term “civic society” in aim to confuse readers of polish translations of Marx and Engels. In such a form idea was connected at the end of 1970s to a phenomenon of prodemocratic opposition in Poland by Smolar who was staying then as an exile in France. At the beginning of 1980s, another exile from Soviet block Arato picked up idea of civil society, applying it to a “third sector” issue, which was burgeoning since middle of 1970s in France. This manifestation stemming from a French political discourse may be assumed as a true beginning of a postmodern discourse on the civil society that was monopolized in 1990s by the NGOs on a global scale.