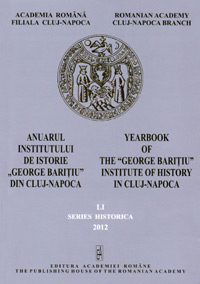 Summary/Abstract: One of the most interesting documents in Romanian historiography, with specific reference to Transylvania, is a strengthening of legal property of Arad Prepositura (Latin term referring to leading clerical position in different religious congregations), legislated by Hungarian King Emeric II, document placed by the editors of collection "Documents regarding History of Romania" sometime in 1202-1203. In fact this is an acknowledgment of property and people depending of Arad Prepositura, based on the document issued in 1177 by King Bella III. There have been registered 373 anthroponomy units of which proudly our wine historiography extracts 164 names. But these owners brought and got involved in most cases one, two, three, four or five individuals that were integrated in the category of dependents of Arad Prepositura. The total number of reviewed dependents is 747 units. Basically other 374 people are not nominated, but are enrolled in the dependence of eclezial structure. Anthroponomical register of the document of 1177 is clearly "multiethnic" and multicultural. Record names looks over anthroponomy from almost every corner of Christianitas in its European areas and from Commonwealth's space of Constantinopolitan management and some units that are descendants of migrants onomastic with Asian origins of the time. The Christian anthroponomy revealed by the document legislated in 1177 and copied in 1202-1203 are in alphabetical order: Achilleus, Adrian, Ambreus, Amen, Andreas-Andrei (2), Benedict (2), Beniamin, Boson, Clemens, Cosma (4), Dumitru, Eliseu (2), Filip (2), Gervasiu, Grigore, Iacob (3), Ilarie, Ioachim (2), Ioan (13), Iordan (2), Kilian, Marcel (2), Martin (2), Mathias, Mica, Michael (2), Nicolaus (5 with diminutives), Oliver, Othmar, Otons (2), Paul (7), Petru (14), Sanctus, Saul (4), Sebastian, Semen, Simon, Stefan (4), Toma, Vitalius, Zaharia, Zaheu (2). Christian names are 42 units while the name unfrequented in the Christian calendar sums up a figure of 271 relevant units. If for the names having the custody of the Church, as I have found many uses with 14 repetitions for Peter, 2 repetitions for Andrew, Benedict, Michael or Zacchaeus etc. meaning 19 names that are multiplied by their carriers, in the other name category of the 271 anthroponyms repeats only Boz (2), Forcos (2), Fulcus (2), Pousa (3), Teca (3). It can be seen without constraints and reluctance that anthroponyms unapproved by the Church have a richness and a numeric exoticism that will only repeat again in Oradea`s Register, afterwards with few exceptions being swept by the ecclesiastical authorities of the list of names worthy to be used in baptism. This document sets our position at a time when Transylvania was not reached in any dimension by the onomastic revolution and Christian names (of Greek, Latin, Jewish vetero and New Testament) are facing strong dynamics with the tribal names and with those unsupported by Church.