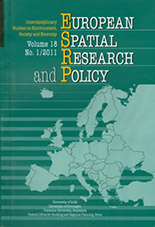 Summary/Abstract: After 1990 it became possible for the towns of the eastern states of Germany to undertake activities aimed at regaining their identity and to obtain financial support for these projects from the federal government and the EU. It also became possible to take advantage of experienced West German firms, specialised in the field of urban regeneration and revitalisation of degraded urban areas. The case of Potsdam shows how urban revitalisation programme for a city’s central area, intentionally destroyed during several decades of the communist regime after the Second Word War, can become an effective instrument in the process of reclaiming the city’s identity through restoration of the historical spatial and functional features of this part of the city.