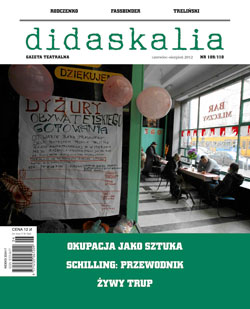 Summary/Abstract: The author examines how viewers’ perception is controlled in the work of Árpád Schilling. His early theatrical experiments aimed at revitalising traditional theatre, but did not go beyond its confines. Presently, however, Schilling has become a severe critic of classical forms. He set a goal of breaking the viewer out of perceptual habits, became more involved in researching theatre’s influence over society, and, above all, began to seek new spectators beyond the institution of theatre.