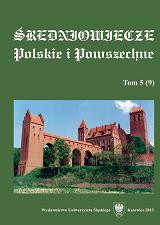 Summary/Abstract: The status of skaldic poetry as a reliable source, and its potential value for historical studies of Scandinavia in the 10th and 11th century, has long been an area of research. Owing to the late state of textual preservation and the poems’ distinctive features, they are rightly referred to with due caution. However, it does not mean that such sources are irrevocably lost for historians. As an example may serve the research done on the presence of the Scandinavians in England at the turn of the 10th and 11th century. Likewise, poetry was written at the court of King Magnus the Good (ca. 1035–1047) of Norway and Denmark. This matter refers to the way that skaldic poets addressed the king in poems composed in his honor. A thorough analysis of three poems (Magnúsflokkr Þjóðólfa Arnórssona, Hrynhenda Magnúsdrápa, and Magnúsdrápa Arnóra Þórðarsona) points to the skaldic poets carefulness in their way of addressing the King so as to accurately communicate his attempts to legitimize his position in Denmark, especially in the face of the conflict with Swen Ulfsson – a claimant to the throne. Poetry in honor of Magnus the Good points to what is found in other sources. Magnus’s power over Denmark was based on his memory of his father, Olaf the Saint, and a way to extend his advantage over his adversaries who made claims to the throne was seen in his taking control of the significant region, namely Scania.