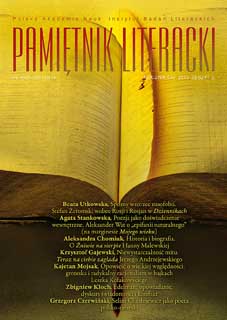 Summary/Abstract: Translated from the Lithuanian by Maksim Duskin. The article discusses a book "Vil'na 1823–1824: perekrestki pamâti" issued in 2008 in Minsk by “Limarius” publishing house with the support of Polish Institute in Vilnius. The book, prepared by a well known Belarusian literature specialist and journalist Alexander Feduta, contains two source publications, namely Joachim Lelewel’s 1831 brochure "Nowosilcow w Wilnie w roku szkolnym 1823/24" ("Novosilcov in Vilnius in the 1823/24 schoolyear") translated into Russian, and for the first time published in extenso in the original language Ivan Loboiko’s manuscript "Moi zapiski" ("My notes") (1860s), the original of which is treasured at Russian Literature Institute in Saint-Petersburg. Published here two texts of memoirist’s character, written at different times, in principle investigate the same problem: the famous case of the Philomaths and the Philaretes and, partially, liquidation of Vilnius University. Apart from the two basic sources the book includes a third one, i.e. ten Loboiko’s letters to Lelewel written between 1824–1829, translated into Russian by Dmitry Matveichik with commentaries by literary specialist Pavel Lavrinec. All source materials are foreworded by Alexander Feduta; Abram Reitblat, a Moscow man of letters, literary sociologist, historian, bibliographer; and Pavel Lavrinec, a researcher in Russian literature produced in Lithuania. The three scholars are also authors of commentaries to the publications under discussion. An attempt has been made in the article to present the significance of those sources from the point of view of 19th century history, but first and foremost Vilnius University history, and to evaluate the quality of the sources preparation. Besides, attention has been paid to the figure of Ivan Loboiko (1786–1861), one of the most controversial activist of that time, a translator, publicist, historian, Russian philology professor at Vilnius University (and after its closing, other higher education institutions). Loboiko was directly engaged into the discussed events at the university. The author was interested to which extent the data contained in the newly published memoirist’s text overlap with those known from other sources, and which image of himself Loboiko creates in the piece. Much attention is also paid to a historiographic discussion, in which the figure of Loboiko is viewed separately, as presented by Polish, Lithuanian, and Russian scholars. An annex by Maria Prussak "Belarusian, Lithuanian, Russian, and Polish Archive Documents. In connection to Reda Griškaitė" is attached to the text.