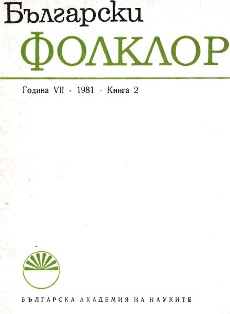 Summary/Abstract: The professionalism of the singers who performed at fairs developed at a stage when the patriarchal way of life in the Bulgarian villages broke down. These singers most often break their ties with the village community and create their works out of the peasant milieu, from which they have derived. At the same time they remain transmitters of the peasant folk-song tradition and especially of the epic recitative. Their performances are carried out in front of the mass public, which gathers at fairs in towns and villages. Their repertory is therefore conformed to this particular circumstance and includes traditional and widely-known peasants’ songs, authorized songs of wars and novelles of everyday-life events, city songs, etc., which are all printed in small song booklets sold by the singers themselves during their performance. Marin Parushev and his son Parush were the initiators of the professional fair-singing. As their contemporaries recall, the Parushev family were talented singers with a fame practically throughout the country. A great number of songs created by them were widespread in various regions and could often hardly be discerned from the folk songs. This is mainly due to the extraordinary interest on the part of the audience towards the contents of the songs, which relate of events connected with the wars at the beginning of the century, and of exciting occurrences such as diseases, bad accidents, murders, etc. The musical aspect of the songs also contributes to their success, although text plays here the leading part. The melodies are completely in the style typical of our folklore and most often bear the characteristic features of the epic recitative. Marin Parushev and his son Parush came from Thrace and they followed in their songs the tradition of the Thracian epic recitative. The regional adherence to this latter is revealed in the lack of heroic songs in their repertory under investigation and the presence of narrative chronicle-songs and ballads, in the octosyllabic metre, in the peculiarities of the melody – a presence of melodic models which are widely used in songs from Thrace. The professional tradition of Marin and Parush Parushev was continued by their grandchild and son Marin, named after his grandfather. He was the family’s last fair-singer and did not contribute too much to the development of the professional fair-singing. The tradition came to an end for the Parushev clan with the third generation of singers. The professional fair-singing is a transient phenomenon, which is connected with concrete historical circumstances and cannot find a ground for its development at present. The folk artistic culture has presently evolved other trends and has acquired new forms of existence and performance.