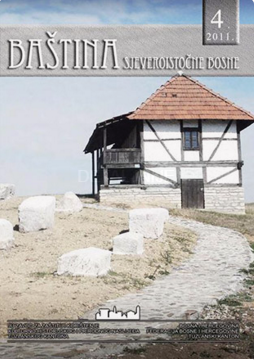 Summary/Abstract: This paper describes the works carried out on the national monument known as the architectural ensemble of the church of St Nicholas in Trijebanj, Stolac Municipality. The works were carried out as part of two projects implemented by the Commission to Preserve National Monuments. The first of these, entitled “Programme for the on-going protection, presentation and integration of the cultural, historical and natural heritage into the tourism sector of Herzegovina region,” was funded by the European Union. The other, entitled “Protection of the church of St Nicholas in Trijebanj SBK800-06-GR-108,” was funded by the Government of the United States of America through the Ambassador’s Fund for Cultural Preservation in 2006. The basic aims of the project were to clear the remains of the church, conduct a survey of its condition, and undertake emergency measures to protect the church from further deterioration.

DŽAMIJA ALI-BEGA KAPETANOVIĆA U VITINI Restauracija nacionalnog spomenika THE ALI BEY KAPETANOVIĆ MOSQUE IN VITINA Restoration of the national monument 2008 CRKVA SV. PETRA I PAVLA U OŠANIĆIMA KOD STOCA Restauracija nacionalnog spomenika THE CHURCH OF SS PETAR AND PAUL IN OŠANIĆI NEAR STOLAC Restoration of a national monument 2008 PROGRAM TRAJNE ZAŠTITE, PREZENTACIJE I INTEGRACIJE KULTURNOG, HISTORIJSKOG I PRIRODNOG NASLIJEĐA U TURISTIČKI SEKTOR EKONOMSKE REGIJE HERCEGOVINA PROGRAMME FOR THE ON-GOING PROTECTION, PRESENTATION AND INTEGRATION OF THE CULTURAL, HISTORICAL AND NATURAL HERITAGE INTO THE TOURISM SECTOR OF THE HE 2009
2021 © CEEOL. ALL Rights Reserved. Privacy Policy | Terms & Conditions of use
ICB - InterConsult Bulgaria ver.1.7.1015